Located in the Teide National Park and stretching to 3,718 metres, Tenerife’s highest mountain is something not to be missed when holidaying on the island. The volcano last erupted in 1909, but there is still a lot of excitement to be found surrounding the peak, which has a plethora of activities on offer.

Here is a guide to some of the outdoor pursuits you may wish to undertake on or around the dormant volcano. It is an opportunity not to be missed if you’re taking a trip here.

While there is a cable car in situ on the mountain that can transport you to the top in just eight minutes, many visitors to Mount Teide prefer to make it to the summit under their own steam. For the majority, this means strapping on your walking boots and completing one of the trails up the mountainside.

It is up to you which route you take as there are three main options to choose from: The Rambleta; Pico Vieja; and La Fortaleza, with the final ascent of the volcanic cone called the Telesforo Bravo.

Going with an organised group or planning your route in advance is imperative to ensure you don’t get lost. If you are coming from the coast be aware that you will gain quite a lot of height during the climb and the air will become noticeably thinner. Be sure to carry enough water for your trek and sun cream to protect yourself in the heat of the Tenerife sunshine.

During one of the volcano’s eruptions the lava cooled forming underwater caves and bizarre rock formations. This makes for the perfect place to enjoy a diving expedition with a difference. Don your scuba gear and explore this other-worldly landscape. There are the remnants of sunken ships, as well as stingrays and angel sharks to encounter.

Discover a network of lava tubes

As well as areas filled with water, previous eruptions have also left air pockets as the lava has cooled. These spaces make up one of the most extensive networks of lava tubes found anywhere in the world.

Take the opportunity to wander through this impressive natural phenomenon, which includes the Cueva del Viento, stretching for 17 kilometres. Guided tours are well worth undertaking as they are informative and help you to find your way.

Take to the air

There is nothing quite like the feeling of paragliding over a volcanic landscape with the amazing views stretching out in front of you. A tandem trip is easy to organise and relatively inexpensive. You will not pass over the peak of Mount Teide itself, but will be able to see it as you swoop around the national park.

Mount Teide really is the destination for all times of the day and night as you can sit and look at the stars once the sun has gone down. The Canary Islands are blessed with especially clear skies and the volcano’s position away from big cities means that it is free of light pollution.

It is a magical spot to enjoy some stargazing – a pursuit that many people only ever have the time to indulge in while they are on holiday. You can start the evening with a barbecue just as dusk is falling, as there are plenty of facilities for this throughout the national park, and make a real event of it.

The Alps are one of Europe’s most beautiful locations to visit and also one of its most popular. Tourism began in the early 19th Century and large scale tourism industry started in the 20th century with large hotels being made. Over the past 30 years or so all tourist facilities have been modernized and a large number of tourists are attracted throughout the year. Switzerland boasts about its cultural and geographical diversity but what stands out the most are its mountain ranges. They attract a number of different types of tourists be it those who come for just the scenic views or for cycling, skiing, lakes, food or just some place to relax and spend time with their family. 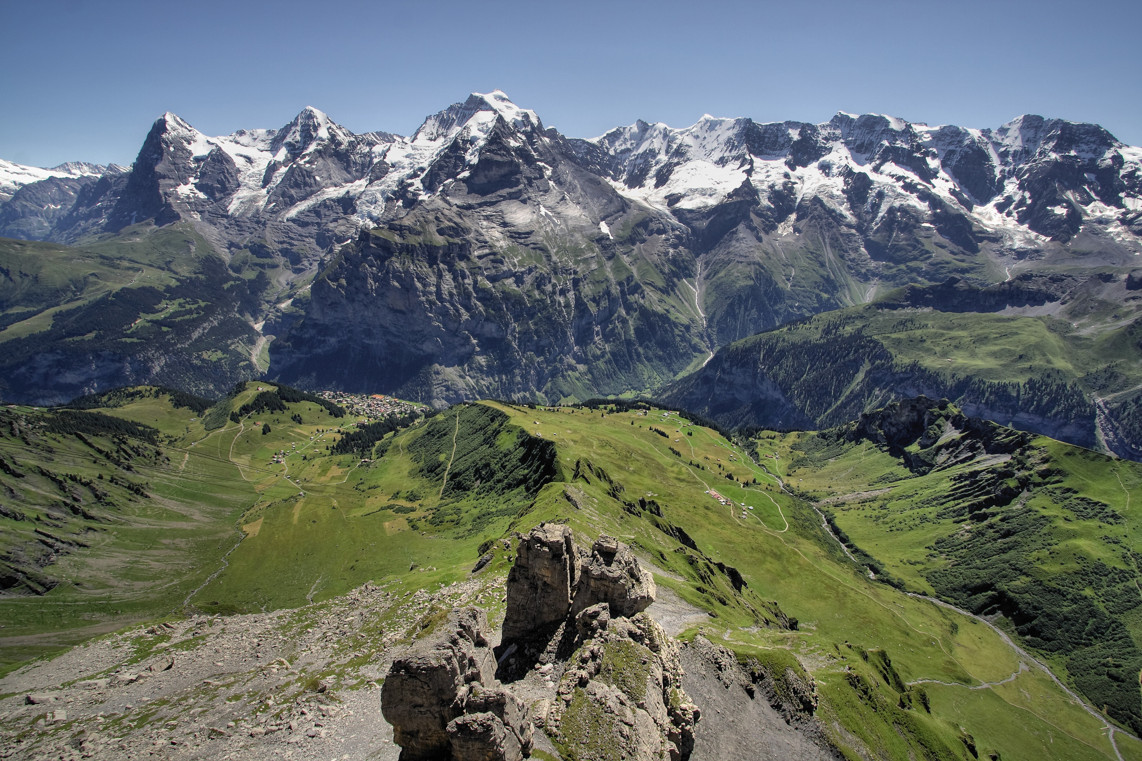 With the fresh mountain air carrying the scent of flowers growing in the meadows with mountain peaks surrounding you from every side Switzerland feels like a magical place in its own right. Even just going for a walk is a magnificent experience in such a place. You don’t need to be a hiker to go see what Switzerland has up to offer because all types of people, even someone with an average physique can be catered to amongst the vast array of choices. Be it a cycling enthusiast or someone wanting a look at the great outdoors Switzerland offers the best mountain holidays experience.

Grindelwald is a mountain village with cafes restaurants and a good number of shops. It is a fantastic place for country walking and enjoying the scenic beauty present there. You can also get a chance to travel on one of the world’s most famous railway journeys to Europe’s highest railway station at 3454 meters. The railway will take you through tunnels and past glaciers which is truly a journey to remember. Holidaying in Grindelwald also leadsup to other scenic resorts including the lakes of Thun and Brienz.

Davos is one of Switzerland’s top walking destinations and has 700km of marked walking trails.  Guests even receive free use of some cable cars so the majestic beauty can be enjoyed by all. There is abundant wildlife and beautiful traditional Swiss villages to be enjoyed in your walks. There is abundance of paths for people to choose from.  Tirano in Italy is just a train ride away to visit and the skiing resort of St.Moritz can also be reached easily. A cheese factory and a brewery are also present in Davos for those looking for a bit extra than just the walking.

Switzerland is also famous for its world class ski resorts and attracts a lot of skiers from all over the globe. Resorts like Zermatt are considered one of the best in the world to go for skiing. Not only are Swiss resorts for professional skiers but teachers are also available who can teach you how to ski in English and Swiss resorts like Wengen have nursery as well as intermediary slopes for those who are not so familiar with skiing.

Whether you are a fan of skiing, cycling, hiking or only plan on seeing the scenic beauty of the great outdoors, Switzerland is the ideal destination to spend your mountain holidays, giving you an experience that is next to no other.

Switzerland has policies and institutions in place which make it very convenient for tourists to exchange currency. ‘Franc’ is the currency used in Switzerland you can check up to date currency rates online with the Travelex currency converter. The best places to exchange currency are Railway stations where they accept foreign currency notes as well as travel’s checks. ATMs can also be used to acquire your currency and most Swiss banks, shops and restaurants in the major cities accept international credit cards.